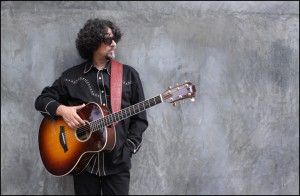 With a career spanning decades Dan Navarro is perhaps best known as songwriter for artists as diverse as Jackson Browne, The Bangles, Keb’ Mo’ and Pat Benatar (the Grammy-nominated classic “We Belong”) to name a few. A multi-talented performer, Dan is a singer, a songwriter and a voice actor in major motion pictures, television series, & commercials. Having released a dozen albums – either solo and as Lowen&Navarro, Dan Navarro released his first true studio-recorded solo album, “Shed My Skin” late last year and, as always, his songs are rich with insight and life experience, delivered straight-up, with honesty, grace and heart, in his moving and expressive baritone voice.